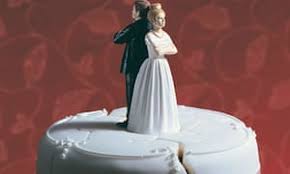 Divorce ceremonies are an increasingly popular alternative to divorce parties. They are a way of marking the end of a marriage and the beginning of the rest of your life. They do them in Japan, and in North America too! (I’m guessing they do them elsewhere as well, I just haven’t seen as much information on them elsewhere yet.)

, and involve a celebrant (as you involved a celebrant or minister in your marriage). They aren’t necessarily a celebration (though they can be); they are most definitely a way of marking a major life transition and making it official.

I interviewed two celebrants who perform these divorce ceremonies for my ebook; one of them, Michele Davidson of Modern Celebrant, was recently profiled in the North Shore News. (More on her and what she does in my book.)

than a divorce ceremony, but the popularity of the ceremony-style gathering is growing too. I guess some people would find it more satisfying? What about you? Which would you prefer, if you were going to throw one?