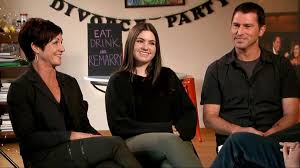 I admit, I watched My Big Fat Gypsy Wedding, and I had no idea that divorces really happened in the gypsy/traveller culture.

But, apparently they do, at least to Josie and Swanley of the first ever episode. And apparently, I shouldn’t be surprised that Josie spend £700 (about $1080 USD /$1103 CAD at the moment) on a divorce cake for her divorce party! I mean, gypsy weddings and wedding dresses are so lavish, of course they’d want to have flashy divorce parties

Josie opted for the “dead groom” themed cake and it was reported by The Sun that she “playfully beheaded the icing figure of Swanley.” She was also quoted in the article as saying “This divorce party

marks a new chapter for me and my daughter and I’m excited for the future.”

I guess the rest of us have more in common with gypsy travellers than I thought!